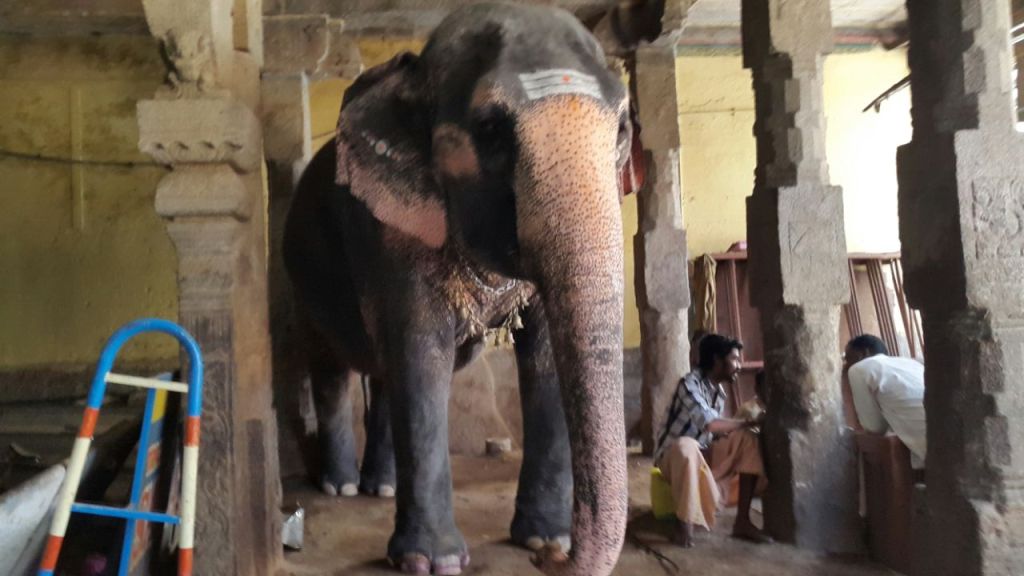 Elephants, or to be precise, one elephant is imprinted in my memory as the first animal I ever saw. That pachyderm was a domesticated elephant at the Rockfort Temple, about 100 meters from my paternal home where I was born, in Trichirapalli.

I’m sure I would have encountered many squirrels, dogs, goats, cows and birds on my way to the temple before I caught my first glimpse of the elephant, but it’s the noble giant that I remember as being the first animal I ever laid my eyes on. It was at least the first wild animal I had seen — albeit domesticated.

My early childhood days used to be spent hurtling from home to the temple to stand next to the Mandap that housed the elephant. The mahout was known to my father’s close friend, so I used to be treated rather special — treated to free friendly knocks on my head by the elephant’s trunk, and numerous thrilling minutes on the elephant’s back every now and then. Somehow I never remembered the elephant’s needle-like hair pricking me back then. The prickly feeling didn’t register until much later when we moved to Madras, now Chennai, when my mother made me sit on back of a baby elephant — it mustn’t have been more than three years old. It pricked liked pins, and although I love elephants, all I wanted to do then was get off its back, and I did.

Back in Trichy, short for Trichirapalli, the elephant was at the center of our day. The daytime, when there was no school, was spent at the Temple, which also doubled as our playground. We — my cousin Raju, I and the kids who lived in the street — knew secret passages in and around the temple that the foreign tourists or even locals visiting the temple wouldn’t know of. That gave me a sense of entitlement — that I held information that others lacked, and it gave me a sense of pride. On top of that, I was friends with the Mahout (not me per se, but my father’s friend was, and I just enjoyed the privilege).

The evenings used to be spent wallowing in the Thinnai, the Tamil word for a raised platform outside the house that in earlier times was used by travellers to rest, and in more recent times used to seat strangers visiting the house. It was always around 4 p.m. or so in the evening that the elephant stepped out of the temple, always in slow, steady steps, to have a drink of water at the community tap. There was a bucket kept under the running tap, and the evening’s chief guest would dip its trunk and take one swig, two, three, four, and so many more until we ran out of numbers that we had learnt at that age in our life. We simply knew that this took up a big part of our evening.

Then she (yes, the elephant was a female) would turn right of the temple to walk towards our house to return to her shed, which wasn’t far from the temple. A shortcut to reach the elephant’s sleeping quarters would have been to turn left, but that would have been a violation of the Hindu tradition wherein a prakaram, or parikrama in Hindi, is done clockwise, and not the other way.

This is when the real fun started. The elephant would relieve herself as she walked back to her shed. She would drop several balls of green fibrous dung, known in Tamil as Ladhi. To me it remains one of the most aromatic things I’ve come across in my life and till date jogs my memory about my childhood. Raju, my cousin who was elder to me by two years and for long my role model, told me that stamping on fresh elephant dung had medicinal properties that could relieve leg pain. We boys from the street used to make a dash to get our feet in elephant faeces as soon it hit the ground, and relish in the warmth of the dung, and the aroma it released as we broke dung.

I don’t remember having leg pain, or if I indulged in the dung stomping ritual only because everyone else was in on it, but it remains one of my sweetest core memories to-date.

As an adult today, I remember recounting the benefits of stepping on elephant dung to my friends and how some cringe and others laugh at the thought. Don’t take my word for it — try it to believe it. If not medicinal benefits, you would have experienced something new in life for sure.

Whenever I have been in the Corbett Tiger Reserve or any forest, or encounter elephants anywhere else, my eyes naturally search for dung. I would find the faeces all right — that fibrous dark green lump. Some not so fresh, others very old, and my mind would start thinking: would it feel the same still, now that it’s no longer fresh and warm. But the thought does occur to me, to kick the shoes, make the run and become a child all over again!

Fun Fact: Did you know Baboons also dig through elephant dung to extract tasty morsels of fruit or seeds that have passed undigested through the elephant’s gut?