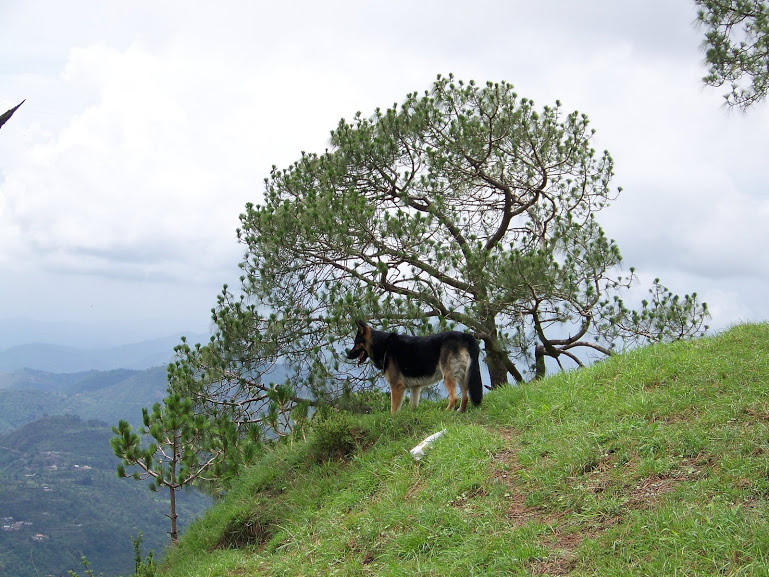 My first interactive experience with animals was when I met Cuckoo eleven years ago. I am not counting the numerous trips to the city zoo when as kids we were herded to see the caged animals seemingly disinterested with what was happening around them. Cuckoo (an Alsatian) was bred by a local veterinary care centre and sold by the breeder to my father. A fluffy handful and restless beyond words, all I could feel when I held him for the first time was his thumping heartbeat.

It was a delight to behold him and play with him and we (my partner and I) would always find the time to go visit my parents however late in the evening or however cold it be. And Delhi winters can be tough when you commute on a motorcycle in zero visibility. One fine day, in about five months, he had grown into an adult. My father’s constant worry was that he was not trained and could not be controlled. His size and outwardly fierce demeanour only compounded this. A free spirit, Cuckoo was as wild as they come – he would get into angry spats with the resident cow, shoo away the raucous crows, run like crazy to frighten the occasional peacock that found a perch on the overhead water storage tank. Once, my parents came back to a home that had been turned upside down – banana peels strewn around, socks and other laundry on the floor, newspapers torn to bits and a chewed-at pair of my father’s shoes.

My father decided to get a trainer who could ‘discipline’ Cuckoo and teach him to behave. Three trainers and many months later, there still was no ‘disciplining’ of our ruffian. He was happy when the trainer came as that offered him another walk, besides his scheduled walks that my father took him for. Soon, my father’s illness (that had remained undetected for long) got to a stage where he was either undergoing painful treatments or was bed-ridden at home.

With illness come changes in the daily routine of a household. While earlier, the morning might have begun with music on the radio over many cups of coffee and conversations, now it was frantic calls to the nursing agency about the nurse not having showed up yet again which meant a lot of additional work for an already over-stressed care-giver (usually my mother). It meant anxiety and impatience ruled the house. It also meant inadvertently de-prioritising Cuckoo’s needs.

Often when I look back at that time, I realise how effortlessly Cuckoo realised and accepted the deep-rooted changes the family underwent and acknowledged the role played by everyone. From a frisky bundle of joy who made playthings out of the curtains, the door mat and his favourite red ball, he suddenly was this sensitive co-traveller who wordlessly felt the pain of people around him and comforted everyone by just sitting close by with fluid eyes that spoke a thousand words – all of them conveying love and compassion.

He however continued to be the wild creature that he was and had constant run-ins with the local stray and more than once ‘accidentally’ bit the neighbour’s pooch. With no place to stay after an angry neighborhood demanded he be sent to the animal shelter, we welcomed him to our home many a time for long periods of banishment. Living with him was an experience and a lesson in how our illusions of control are as ephemeral as the morning dew drops. He was not one to learn to ‘behave’ and maintained his distinctive personality.

Once, left behind as we had to travel, he refused to eat food and finally ate only when he was fed from the hands of my partner’s mother (who was unaccustomed to and disliked any contact with animals). That was his way of asserting his being and reiterating the concept of free will. Another time, he bit me when I went to pet him, and while I was initially pained that we still did not share that total bond of trust, I later realised that it was the millions of crawling tics on his back that had made him miserable enough to snap at anyone. And his fluid eyes the next morning spoke volumes about his helplessness. The sweltering summer months (even indoors) were not particularly the most conducive for Cuckoo – who was more at home with the sub-zero winter temperatures.

Today, both of them are not around – I lost my father six years ago and then three years later Cuckoo also passed on. While my father was my inspiration to be a humanist, Cuckoo inspired me to value free will. A wild creature till the very end, he was, at the same time, a sensitive soul with a heart that acknowledged all actions unconditional. While he never learnt to ‘behave’, he exercised free will and empathy in most of his interactions.

When I go to a national park now, I sense the same spirit of free will that most animals exercise. Be it the elephant that chooses not to charge at you and trample you despite you getting annoyingly close to them to get that perfect shot, or the tiger that walks a breath away in the foliage and chooses not to attack you despite your being noisy and disrespectful of their space. To me, wild animals offer a window to understand how to co-exist, respect each other even as we exercise free will. They do kill but with the intent to survive and not mindlessly, not for sport. Their heightened sense of awareness of their surroundings and their ability to continuously adapt to their environs offer us insights into being socially-aware, less selfish and more empathetic to each other. To me, they are the only hope.